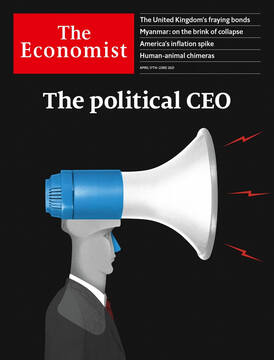 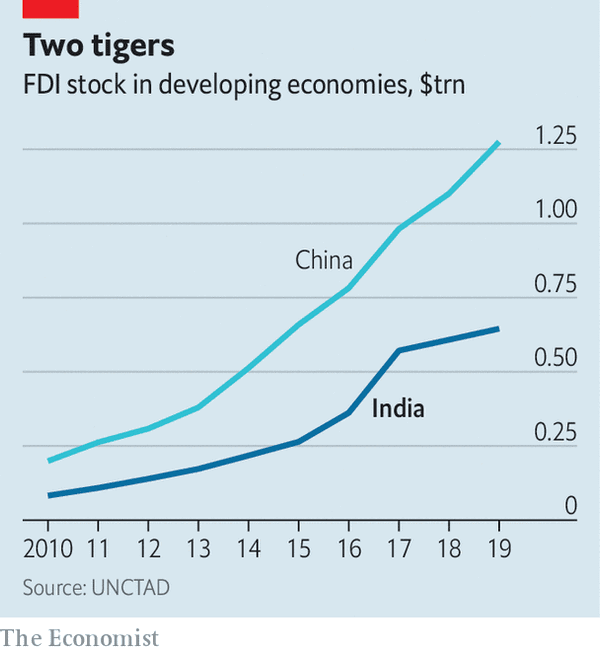 It cannot match China’s heft in foreign investment, but offers lessons for other investors

IN CENTRAL Lusaka a brand-new flyover flutters with the green, white and saffron of the Indian flag. Throughout the Zambian capital lorries produced by Tata Motors, part of the steel-to-tech Tata empire, are used for everything from construction to rubbish collection. Signs inside the vehicles instruct drivers in both English and Hindi. The lorries’ occupants phone each other over a mobile network run by Bharti Airtel, an Indian telecoms firm.

Many Zambians, like people in many other developing countries, complain loudly and often about the Chinese firms that are big local investors. India is also a big commercial presence but no one bats an eyelid. Tata Motors has huge assembly plants in many countries, including South Africa and Malaysia. Bharti Airtel is one of the biggest telecoms operators in Africa. The Aditya Birla Group is the world’s largest producer of carbon black, an ingredient in car tyres. It is one of Egypt’s biggest industrial investors and exporters.

Even in sectors governments deem strategic, such as infrastructure and communications, Indian foreign direct investment (FDI) is not viewed as geopolitical scheming or hegemonic ambition. “That’s one of the selling points for India,” says Gareth Price of Chatham House, a British think-tank. “With the obvious exceptions of Pakistan and China, everyone is kind of all right with India.”

India was once compared to China as an emerging-market power with capital to splurge. The spectacular rise in Chinese investment over the past decade or so has scotched that analogy. Now poor countries are trying to finance their recovery from covid-19 without deepening their debt or their dependence on China. India’s forays are tiny in comparison—around 7% of China’s total stock of FDI in developing economies (not counting investment in Hong Kong, which is sometimes included). But its approach has lessons for foreign investors trying to go about their business without setting off alarm bells.

Firms from emerging markets have long invested in other emerging markets. Their experience at home of delays, chaos and financing constraints provide useful preparation. India helped organise the Bandung conference in 1955, which discussed “South-South” co-operation.

Indian investments in the rich world are more likely to grab headlines. Deals such as the Tata Group’s acquisition of Tetley Tea or Jaguar Land Rover involve household names, hundreds of millions of dollars and a smack of reverse imperialism. But India’s stock of outward FDI to the poor world is about the same as its stake in rich countries, and has been growing more steadily over time. In 2019 it reached roughly $46bn, according to the latest estimates by the UN Conference on Trade and Development, up from around $40bn in 2010. About $30bn of that is in Asia and around $13bn in Africa.

Some of the data are sketchy. Multinational companies headquartered in India generally set up local subsidiaries. They route money through tax havens such as Mauritius. And the 18m-odd overseas Indians (those born in the country or holding Indian citizenship) include entrepreneurs who switch passports and register businesses locally. “It becomes a jigsaw,” says Jai Bhatia of Cambridge University.

Even if some pieces of the puzzle are missing, those that remain demonstrate the most obvious reason investment from India is viewed with less suspicion than that from China: scale. Even as Indian investment has grown steadily, Chinese investment in the poor world has soared: from $83bn in 2010 to $645bn in 2019.

Another reason is that, unlike Chinese investment, little of India’s FDI comes from state-controlled companies,which are often suspected of operating with one eye on geopolitical strategy and foreign-policy goals. ONGC Videsh is one of the few sizeable government-owned Indian businesses operating abroad. It has bought up assets in countries as far apart as Mozambique and Colombia.

But its firepower is not in the same league as its Chinese peers. Sinopec, a state-owned oil company, first muscled its way into the Angolan oil industry in the mid-2000s. It gazumped ONGC to buy a stake in a block from Shell, an oil-and-gas giant. Jonathan Hillman of the Centre for Strategic and International Studies, a think-tank in Washington, points out that India has nothing comparable to China’s Belt-and-Road Initiative, a global infrastructure-building scheme. “The Indian government hasn’t spent as much time presenting grand visions,” he says.

Most of India’s FDI comes instead from privately held businesses, which undertake projects overseas for purely commercial reasons. They include recently arrived entrepreneurs, (disparagingly dubbed “Rockets” in Kenya for their intention of making fortunes and quickly heading home), multinational investors headquartered in India and diaspora families who have been doing business abroad, especially in Africa, for generations.

Indian traders began settling around the edges of the Indian Ocean centuries ago. In the 19th century thousands more were sent to far corners of the British empire, to work on plantations in Mauritius and build railways in Kenya. Many stayed and built their own businesses. Others braved long journeys on dhows to join them in Africa. “We tend to view things ahistorically and through a geopolitical prism, so it is all about China,” says Parag Khanna, an international-relations expert whose father worked for the Tatas in Africa. In a sign of China’s rise on the continent, the railway that drew Indians to Kenya in the 1890s has been replaced by the Madaraka Express, a Chinese-built line named after the anniversary of Kenyan independence from Britain (madaraka means “ruling power” in Swahili).

The Indian diaspora has sometimes experienced resentment. In the 1970s, for example, Idi Amin, a despot, expelled Asians from Uganda and seized their property. But by and large, a shared history has bred familiarity. Kenya’s government has gone so far as to recognise Asians as the country’s 44th official tribe. Vimal Shah, whose grandfather emigrated from India, started the Bidco Africa juice-to-cattlefeed empire with his father and brother about 35 years ago. He knows the best Indian food in Nairobi and volunteers at the Jain community centre, but has a Kenyan passport and sees himself as thoroughly Kenyan. “I’m not a desi [local] from India,” Mr Shah says.

After independence, industrialists looked beyond India’s borders to free themselves from red tape. One of India Inc’s first foreign ventures was a textile mill built by the Birla Group in Ethiopia in 1959. The conglomerate then expanded across South-East Asia, where economies were opening up. A second, bigger, rush of FDI came in the 1990s, when India loosened capital controls. Last year Indian businesses set up 4,590 projects abroad, up from 395 in 2000, according to data crunched by Prema-chandra Athukorala of the Australian National University.

A third reason Indian investment tends to arouse less resentment than that from China is that Indian companies have a largely justified reputation for trying harder than the Chinese to hire and buy locally. In 2006 the World Bank surveyed almost 450 businesses in Africa. On average, Chinese firms employed almost a fifth of their workers from China and other East Asian countries, whereas Indian firms brought less than 10% of their workers from India. The Chinese businesses imported 60% of new machinery from China; their Indian peers bought just 22% from India. That trend continues today, says Harry Broadman, the economist who led the research.

The fact that many Indian companies are still family-run may have something to do with that. Executives worry about both their founders’ reputation and the way their actions reflect on Mother India. Rudrarup Maitra, who looks after Tata Motors’ international commercial-vehicles business, talks about the company’s contributions to development in its overseas markets, including its efforts to get ambulances to Sri Lanka and rubbish trucks to Nigeria. “There is definitely a responsibility we have to brand India,” he says.

Some think India does too little to parlay its diaspora into investment. India’s first prime minister, Jawaharlal Nehru, was a staunch believer in anti-colonial solidarity and refused to use overseas businesses as a tool for foreign policy. Successive governments have followed his lead and offered at best limited support to Indian businesses’ efforts abroad. Diplomats complain that they can do little to help their compatriots beyond courting local governments and rolling out the red carpet for visiting industrialists. Manu Chandaria, who was born in Kenya over 90 years ago to Gujarati parents and is now one of east Africa’s best-known industrialists, laments that the government in New Delhi has not madethe most of ethnic Indians abroad, using them as neither “a tool” nor “a resource”.
Flying the flag

Gurjit Singh, a former Indian ambassador to Ethiopia, Germany and Indonesia, suggests that India Inc might pack a bigger punch if India’s government increased support to cut the local cost of financing investment overseas. India provided $7bn in official medium- and long-term export credit in 2019, according to the Export-Import Bank of the United States. That makes it the world’s fourth-largest provider, but is still far behind China’s $33.5bn.

But Indian companies’ independence from their home government also brings an advantage: it contrasts favourably with the perception that Chinese ones will unquestioningly do the Chinese state’s bidding. Bharti Airtel, which has had a large share of Africa’s telecoms market since its 2010 acquisition of Zain Africa, a Kuwaiti telecoms company, has obvious strategic power. Akhil Gupta, a high-up at the company, says Airtel would “without question” do anything an African government asked, including disconnecting its service. But he would certainly not take orders from the Indian government on how to run Airtel’s overseas operations, he says. “That is the beauty of democracy.”

Not all businessfolk with Indian roots excel as ambassadors for the motherland. Mahatma Gandhi, who spent time in South Africa as a shipping lawyer, created a good impression. The Gupta brothers, less so. The trio, who moved from Uttar Pradesh to South Africa in the 1990s, were at the centre of the corruption scandal that helped end the presidency of Jacob Zuma in 2018. Elsewhere, Vedanta Resources is locked in a bitter dispute with the Zambian government over its copper mines.

The arms-length relationship between New Delhi, India’s political capital, and Mumbai, its commercial centre, works well in good times. But when India Inc messes up abroad, India looks bad. And when the state’s relationship with another country gets complicated, investors find doing business there harder. “Does flag follow trade or does trade follow flag?” asks Tanvi Madan of the Brookings Institution in Washington. “What you find is that they become intertwined.” ■

A version of this article was published online on April 11th, 2021.