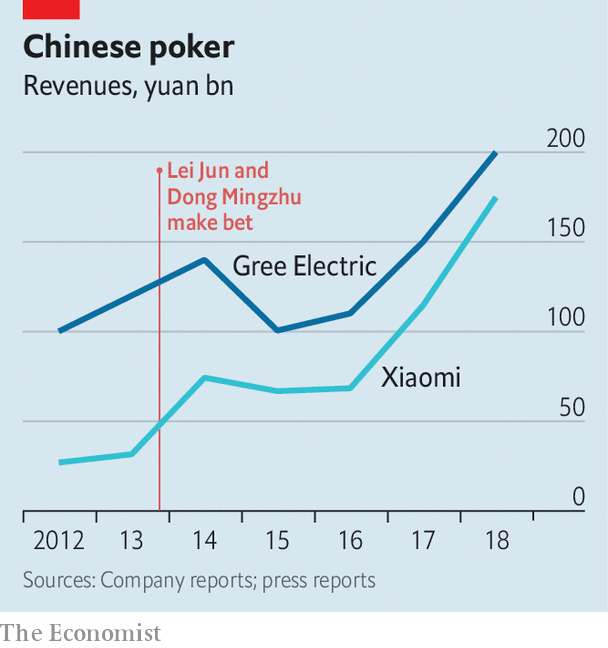 The wager offers a vignette of corporate China

IN 2013 BUSINESS folk gathered in Beijing to honour Chinese “Economic Figures of the Year” were treated to an unexpected twist. One of the winners, Lei Jun, ventured that in five years the sales of Xiaomi, the smartphone-maker he founded in 2010, would surpass those of Gree, a manufacturer of air-conditioners with government roots. To make things interesting Dong Mingzhu, an entrepreneur and Gree’s chairwoman with whom Mr Lei had shared an award, bet him 1bn yuan ($148m today) that her company’s turnover would stay ahead. Mr Lei accepted. Since March 19th, when Xiaomi posted revenues of 175bn yuan in 2018, corporate China has awaited the figure from Gree. On April 28th the verdict was in: it made 200bn yuan. Mr Lei was out of the money.

The bet looked bold for Mr Lei in 2013. Xiaomi was then making a quarter of Gree’s 120bn yuan in annual sales. The “Apple of the East”, as it was dubbed, represented a new sort of Chinese company: market-driven and spunky, not state-led and stodgy; online instead of bricks and mortar; relying on digital technology rather than mechanical engineering. By mid-2018 Xiaomi’s revenue neared 90% of Gree’s (see chart). When the firm floated on the Hong Kong stock exchange last July it was valued at $54bn. It has become the fourth-most-valuable Chinese brand, according to BrandZ, a consultancy; Gree is 29th. Ms Dong herself suggested that the wager was meaningless given how different Gree and Xiaomi were.

In reality, the companies are not that dissimilar—and growing less so as China’s economy modernises. Both have boomed thanks to swelling Chinese disposable incomes. The fiercely independent Ms Dong has repeated publicly that her firm must fight for customers just as private ones like Xiaomi do. In April Gree’s largest shareholder, a regulator overseeing state-owned enterprises, said it would sell most of its 18% stake. To build an ecosystem of devices controlled by his mobile phones, Mr Lei relies on closeness to China’s manufacturing heartland, Gree’s home.

They face similar challenges, too. The competition in their core markets is stiff. Xiaomi’s margins from low-cost phones are wafer-thin. Gree has lost share of Chinese air-con sales to rivals such as Haier and Midea, which are introducing more high-tech models. Xiaomi and Gree have both taken a punt on changing their original business models. Gree is selling more online. Xiaomi is opening more physical stores. To keep up with rapidly changing consumer tastes, Gree has moved into smart home appliances, as well as low-emission vehicles and chip design—areas in which Xiaomi now does business, too. Ms Dong now makes smartphones, and Mr Lei has a line of air-conditioners. Whether or not he makes good on it—gambling is outlawed on the mainland—the bet highlights the changing face of China Inc.